Jonathan has enjoyed a highly successful 40-year career as an internationally acclaimed Mediator, Arbitrator and Barrister.

After graduating from Nottingham University with a University Exhibition and LLB Honours Degree in 1973, Jonathan joined one of the City’s leading Law firms Ince & Co. Rising to a Senior Partner by 2002, Jonathan went on to specialise independently in Mediation, was subsequently called to the Bar and joined Chambers in 2013.

Jonathan provides mediation services in the UK and internationally for a wide range of civil and commercial cases.

His vast experience in a range of mediation and arbitration cases has given him the tact and robustness that leads to a satisfactory conclusion, enabling all parties to cost-effectively put the case behind them and get on with their business. He has particular expertise in International commercial law, including settling cases in shipping, maritime, energy, insurance, international trade and commerce across a range of jurisdictions.

Jonathan is fluent in English, French and German and is well placed for both national and international mediations. He was one of the very first International Mediation Institute (IMI) Certified Inter–Cultural Mediators in the UK and is passionate about recognising and resolving the cultural differences that can sometimes lead to disputes.

Jonathan has been selected for independent research by Who’s Who Legal as he is among the world’s leading mediators and will be featured in Who’s Who Legal: Mediation 2019 edition.

Jonathan is one of the founder members of the Centre for Effective Dispute Resolution (CEDR) and is well known for the use of the Alternate Dispute Resolution (ADR) principle in resolving cases. His wise guidance, flexible approach and excellent communications skills make him the right choice for both complex and more straightforward mediation cases.

Jonathan is also fully accredited by and a member of the International Mediation Institute and a Fellow of the Chartered Institute of Arbitrators. He has lectured worldwide and written numerous articles on the subject of mediation. He is co-author of a number of publications relating to ADR and Commercial Disputes.

Find out more about Jonathan’s approach to mediation in this interview with ADR Group: 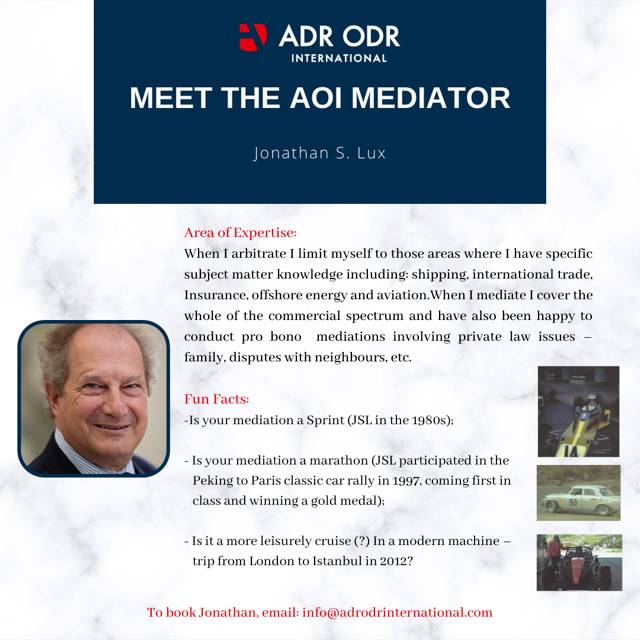