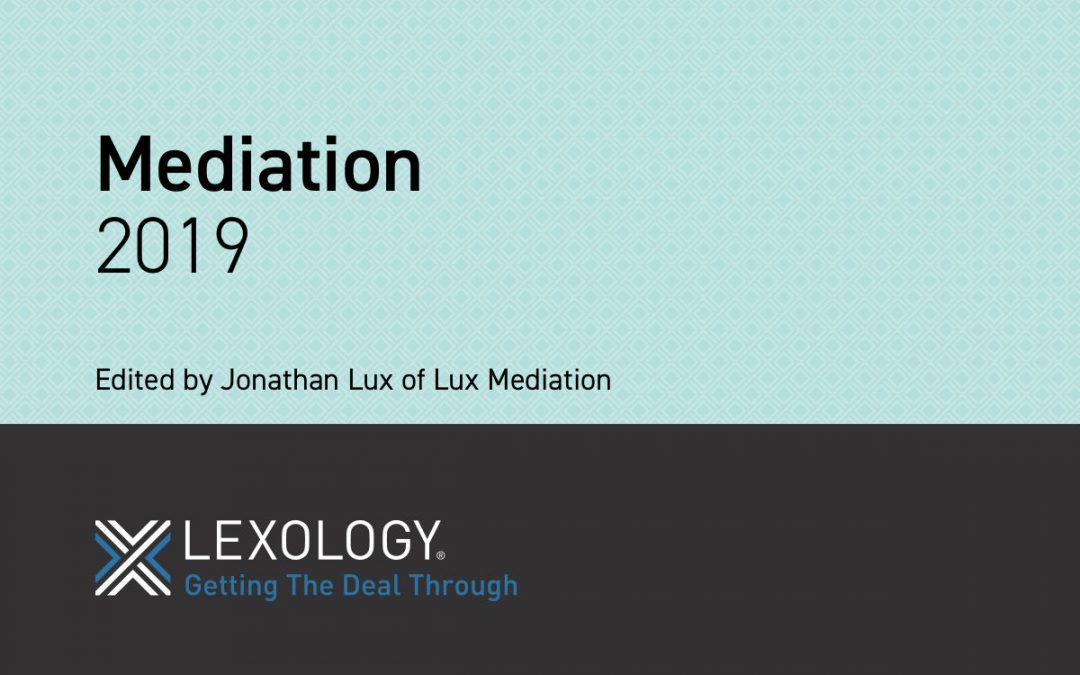 The definition I prefer places litigation and arbitration on one side of the fence and ADR on the other. In other words, the distinguishing feature is that the ADR neutral’s role is not to ‘decide’ the dispute but to facilitate a settlement.

Mediation, while it may have been engaged in privately, was more or less unknown in the common law world until about 35 years ago. The civil law codes, on the other hand, contain provisions dealing with conciliation; in practice, however, these provisions were only rarely brought into play.

Modern ADR had its birthplace in the United States, and some say that it is hardly surprising, given that in the US the twin evils of cost and delay in the litigation process are at their most acute. Although there is a range of ADR processes, mediation has become by far the most popular.

The process
As mentioned, the mediator’s role is not to make any decision but, rather, to facilitate a settlement. There is considerable flexibility in the process, but a typical mediation will involve the following stages:

In some countries (eg, Germany) the norm is for the mediator to conduct the mediation with both parties present throughout the day.

In England, on the other hand, it is the general practice for the mediator to hold private caucus sessions with each party. Indeed, in some mediations, the distrust, and sometimes loathing, between the parties can be so great that they refuse to participate in joint sessions throughout the whole process.

Generally, however, the norm in England is for the day to start with a plenary session where the mediator explains his or her role and both parties then have an opportunity to present their issues relating to the dispute.

It is thereafter that the mediation process tends to come into its own, with the parties retiring to separate rooms and the mediator shuttling backwards and forwards between the parties until a settlement is achieved, which is said to happen in approximately 85 per cent of cases.

At that point, the mediator will tend to bring the parties back together to draw up and sign the settlement agreement – a very necessary step to ensure the likelihood of the terms of the agreement being carried out after the mediation process has finished.

A popular process?
The process is private and confidential, so it is not easy to provide reliable data. It has been suggested, however, that commercial mediations in the UK are running at approximately 10,000 per annum, although I suspect that the true figure is far higher. With strong support from the government this number is set to rise. Indeed, in these uncertain times the government will be attracted to mediation if for no other reason than that it can serve to shave a considerable amount off the justice budget.

There is strong support also at the European level and an EU Directive on Cross-Border Mediation. In some countries mediation has been made compulsory – Italy and Argentina being two examples.

Other facts that are likely to lead to increased mediation include the following:

What are the disadvantages?
Mediation will not give parties security for their claim, the publicity that they may want, the binding precedent that comes from a court judgment, or enforcement. On analysis, however, these disadvantages will evaporate.

If a claimant is concerned that the defendant may not be financially secure then there is nothing to stop the claimant from mediating and concurrently starting court or arbitration proceedings and then applying for a freezing injunction or ship arrest to ensure that there are assets to meet whatever entitlement the claimant has.

If it is publicity that a party wants (or more likely a published apology), then this can be made a term of the mediation settlement.

That said, if there is an issue of law on which a court decision is wanted (for example, on the construction of a clause in a contract) then the parties should seriously consider mediating everything but the contract issue and referring only the latter to the court.

It is also said that there can be difficulties in enforcing the mediation settlement agreement, which is simply another contract that can be broken. However, this ignores the fact that in many cases court or arbitration proceedings will have been started before the mediation takes place and, by agreement of the parties, it is perfectly possible to convert the mediation settlement agreement into a consent judgment or consent award with all the possibilities of enforcement that attach to a judgment or award.

Another suggested disadvantage is that mediation can be used (or abused) by a party as a ‘fishing expedition’ (ie, the party has no serious interest in settlement and simply wants to prise as much information from his or her opponent as possible to increase the chances of winning the subsequent court or arbitration proceedings). Again, this does not really stack up. If a party’s evidence (documentary or witnesses, or both) is weak then this will come out before or at the trial. What then is the real disadvantage of this becoming apparent earlier, when only a fraction of the likely ultimate costs have been incurred?

The future of ADR
There is an increasing number of mediation issues coming to court (eg, confidentiality). It will be most important for the court to resist the temptation to pry into the mediation itself.

Another issue is that it may be difficult to mediate early, before each party knows what the other will say and has seen the evidence to back the case (or defence) put forward. I have devised a solution to this, which I have called ‘Early Resolution’, described in greater detail at https://www.lux-mediation.com/wp-content/uploads/2019/04/Lux-Mediation-Agreement.pdf.

ADR is relatively young – certainly by comparison with the second oldest profession, the law. There is still considerable ignorance even among lawyers as to what it is and how it works. It is crucial that in these early years we take the time and trouble to grow a cadre of professional mediators who can be trusted to take good care of the process. If this occurs then parties can only be impressed by the singular cost-efficiency, speed, potential for left-field solutions and ‘relationship’ advantages that mediation offers. This may lead to mediation becoming the dispute resolution process of first recourse and this publication is no doubt a helpful step in that direction.

Accreditation: Reproduced with permission from Law Business Research Ltd. This article was first published in Lexology Getting the Deal Through – Mediation 2019 (Published: September 2019). For further information please visit https://www.lexology.com/gtdt.