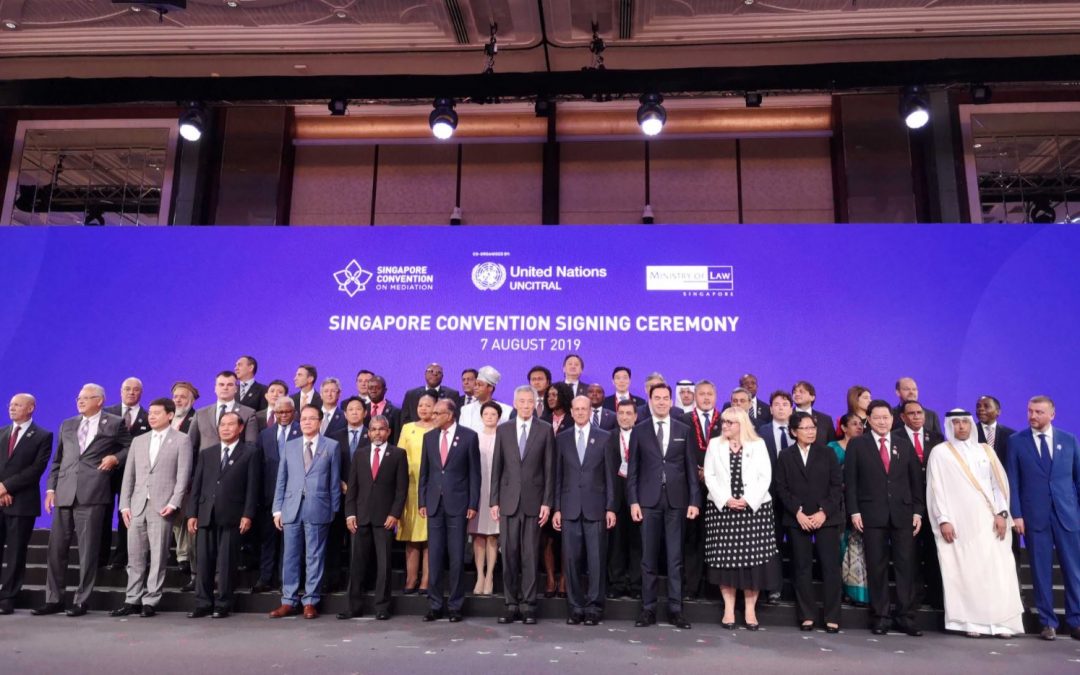 What is the Singapore Convention and why is it important?

Since UNCITRAL opened the Singapore Convention on Mediation (“Convention”) for signature on 7 August 2019, there have been 55 signatories and nine countries have ratified the Convention, which came into force on 12 September 2020. The Convention aims to make the enforcement of mediated settlements in international commercial business-to-business disputes quicker and easier.

The UK Government recently launched an open consultation to consider adopting the Convention. This is a step in the right direction given the prominence of the UK in international dispute resolution generally and the exponentially growing popularity of mediation to resolve disputes far more quickly and at greater saving of time, effort and expense compared to adversarial processes.

Ordinarily, when one party defaults after signing a mediation agreement in a cross-border commercial dispute, the other party usually has to bring a claim for breach of contract in the forum stipulated in the underlying contract. After a claim leads to a favourable final award or judgment, the party may still need to obtain enforcement, sometimes in a different jurisdiction to the claim where assets are based, if the defaulter still does not then voluntarily honour the claim.

That usual system is often time-consuming and expensive as a result if there is a default. As such, the risk of a default can undermine the benefit of having reached a settlement agreement in the first place, potentially making mediation a less attractive option for cross-border disputes if there is a genuine doubt that the settlement agreement will be honoured. This is despite the fact that most disputes are resolved amicably based on a preference to reach a consensual resolution.

The Convention should enable a party if it has to request enforcement to proceed directly in the country where enforcement is required, thereby skipping one part of the steps in the traditional process. This is of obvious benefit when compared to how things would ordinarily have to proceed if the Convention does not apply. On that basis, the Convention will benefit businesses by making mediation an additional and often far more attractive dispute resolution option to litigation, arbitration or a settlement negotiated by the parties alone to resolve cross-border disputes.

Grounds for voiding the original mediation agreement under the Convention are appropriately limited, the most significant of which is based around failure of the mediator, by not being impartial or by mishandling the mediation process. The Convention, therefore, encompasses some similarities and appropriate safeguarding features to those found in the New York Convention on Arbitration, which had helped to propel arbitration to being a preferred choice of dispute resolution, over the more traditional litigation option, in many cross-border commercial transactions.

The reality is that the Convention can, given its provisions, already apply to assist parties to enforce mediated settlement agreements reached in the UK, including those to which English law applies, dependent on the circumstances of each particular case. For example, if the mediated settlement agreement is to be performed in or where its subject matter is most closely connected to a state that has signed the Convention.

On that basis, mediated settlement agreements reached in the UK can already benefit from the Convention in some instances. That benefit would only grow if the UK signs and ratifies the Convention too, making the UK even more attractive as a mediation forum in addition to its long standing and preeminent reputation for commercial arbitration and litigation. That is particularly the case as the UK is an important international forum through which the enforcement process may proceed.

How could mediation help in international and cross-border disputes?

While a mediator sometimes does not become involved until legal proceedings are underway, that usually does not have to be the case, and early intervention can often be far more desirable. At the point when substantial costs have already been incurred, achieving a satisfactory settlement can become difficult and the extra costs involved can become an obstacle to an amicable solution.

Mediation offers a faster, commercial, and discreet resolution. As some contractual disputes are very expensive and time consuming to resolve formally and may invite unwanted publicity, mediation provides businesses with a more pragmatic and confidential solution than traditional litigation or arbitration.

Mediation provides a win-win result. A wide range of commercial solutions, which judgments or awards cannot achieve, are possible, particularly where there is an on-going relationship, to seek a win-win result, not a bruising win-lose.

Commercial Mediators understand your business. A specialist commercial mediator is not only an expert at helping parties reach a mutually acceptable agreement but will understand the commercial situation of both sides and the constraints they face. The mediator will use their understanding of the way business is done to help the parties to come up with inventive solutions, including ones that the parties might not have considered on their own.

The benefits of seeking an earlier resolution to a dispute

Time is of the essence for relationship repairing. Time is often a big factor in resolving a dispute satisfactorily. Addressing a problem as soon as it is apparent and having an early session with a mediator may resolve the issues promptly by fostering a collaborative approach by the parties and help to improve the relationship.

Where difficulties are allowed to worsen and communication becomes sporadic and combative, it is possible to waste a great deal of time achieving little except a worsening of relations, so it is important to be proactive.

Negotiation with an open mind is beneficial to everyone involved. It is also important to approach a problem with an open mind and some flexibility because resolving a dispute at an early stage involves willingness to compromise and a genuine desire to reach mutually agreeable outcomes.

In helping the parties to see the pros and cons of escalating the dispute, and to consider other important ramifications of perpetuating a dispute, a mediator helps the parties to appreciate the perils and to see the value of improving the situation.

Lux Mediation is an internationally renowned mediation chambers with experienced practitioners. We are perfectly positioned to help you with civil, commercial, and maritime matters. Our practice covers the UK, Europe as well as internationally. We are experts in multicultural matters and cultural differences and understand the impact these have on the success of your business relationship. Our team provides remote mediation services too, which means that we can assist you wherever you are.